I have been testing the builds through various stages of the current development cycle. This finished product is literally a speed demon that offers make-it-your-way functionality for users who want to create a personalized OS. For those who do not like tinkering, the default settings give a pleasing user experience.

MakuluLinux Flash 2020 is a traditional/retro style Linux operating system that focuses on ease of use, comfort and stability. It uses a highly tweaked Xfce desktop environment with features previously not seen in standard Xfce integrations. 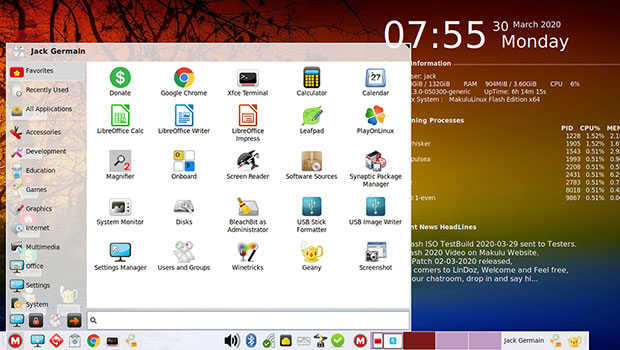 The newly rebuilt Flash 2020 OS has a dual menu system. The first, launched with the M button on the left end of the bottom button is displayed here. The M button toward the right end of the panel launches a full screen display of the entire installed software catalog.

The Xfce desktop is known for its speed and flexibility, but despite the amount of eye candy and other enhancements Raymer built into Flash 2020, its performance is neither degraded nor overtaxed.

MakuluLinux Flash offers 24 varieties of different-colored themes and a unique selection of in-house background images. The default setup is no less stunning.

Flash is built on the new 2020 Series Base designed to enhance the three MakuluLinux flavors: LinDoz 2020, Flash 2020, and the soon-to-be-released Core 2020.

Unlike the previous code base, Raymer built this new base to get under-the-hood updates from the Ubuntu Bionic repository. This gives Flash a life cycle until 2023 that can be extended to 2028. Previous versions of MakuluLinux were based on the Debian Testing Branch.

Flash runs the Xfce desktop environment. This is a heavily modified integration of Xfce built with lots of flashy options not found in traditional Xfce configurations. 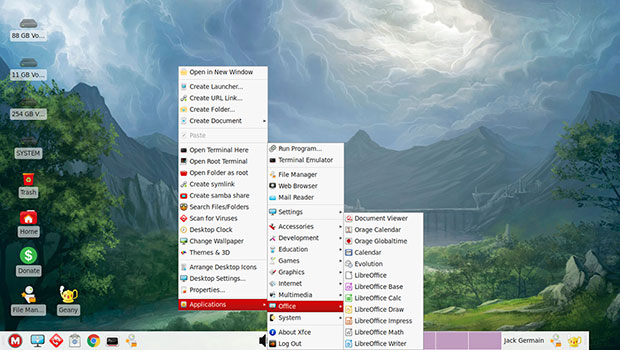 The third menu option in this heavily modified Xfce desktop pops up anywhere on the desktop where you right-click. That action gives you a fully populated but streamlined menu.

Flash’s familiar desktop may have special appeal for more traditional Linux users but its likability is not limited to them. The Xfce desktop normally is considered a lightweight environment. Flash 2020 has nothing lightweight about it.

Developers trimmed down that list to what is needed to operate the OS comfortably without it becoming bloatware, according to Raymer. The end result is a nicely rounded OS with a good selection of software out of the box.

Flash should be attractive to users who like a more modern environment with an ample offering of animation effects. This level of animation is something you are not likely to find in any other Xfce integration.

Flash 2020 offers full built-in Compiz support to enable cool animations and 3D effects. With a click of a button, you can transform the desktop to a fully working wobbly wonky environment. That option comes with cube effects, transition effects, and a ton of other visual settings that you can turn on and off at your own discretion.

This latest Flash release includes a very nice variety of icon sets and theme selections not found elsewhere. Rather than settling for the disappointing collections of themes since the GTK3.20 release, Raymer designed his own.

Included is 32-bit library support to optimize Steam and other gaming functionality. You can start gaming straight out of the box without having to go through huge instruction manuals to set it up. Steam Proton also is supported fully, as are Flatpak and SnapD for enhanced software installation and removal.

The look and feel of Flash 2020 is much like the previous Flash design. It is a traditional look with a modern flare to it. The developer’s goal is to avoid pushing any jarring changes to rattle established users.

The default layout has a Conky display of date, time and system monitors. This display, the Desktop Clock, fills nearly all of the right third of the screen. A neat setting lets you select white or black display to make the content readable on the multicolored background image you select. 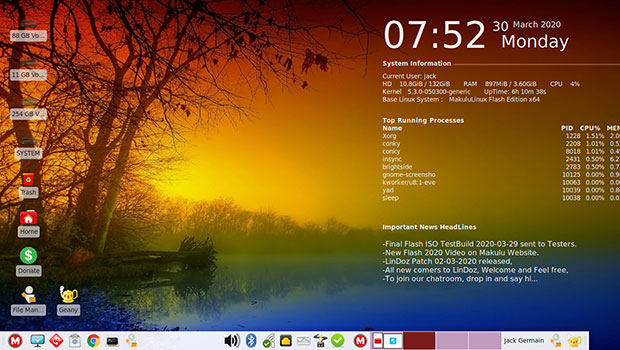 The tweaked Xfce desktop displays large Conky-style system monitor readouts on the right half of the screen.

Another setting suggests you can turn off that display with one mouse click. When I tried it, it flashed the screen and returned with a wonky-looking style change but failed to remove the Conky clock applet.

I applied my own workaround to solve the problem. I went to Session and Startup in Settings tab in the settings Manager. There I unchecked the entry for Conky and rebooted. Problem solved.

MakuluLinux arrived in 2015. It originally was based in South Africa. More recently, Raymer relocated to Da Nang, Viet Nam. He completely reworked the distros into a productive and fun-to-use computing platform.

The LinDoz distro uses Microsoft Windows themes integrated with superior Linux functionality. It provides a comfortable, familiar computing platform for those looking for an easy-to-use alternative to the Windows OS platform. It runs a heavily tweaked version of the Cinnamon desktop.

Flash also supports Windows applications using WINE right out of the box. Just double-click an exe or msi file as you would in Windows to run the program.

Flash caters to physically disadvantaged users who rely on screen readers or need to magnify their desktops. Flash comes with a screen reader, magnifier and an onscreen keyboard preconfigured and ready to use out of the box.

Some Linux applications bundled in LinDoz are retained in this Flash release. The developer reinforced the no bloat policy. You get only one application for each type of activity.

For instance, preinstalled are one Web browser, one text editor, one multimedia player, one graphic editor, etc. You are free to add/remove software to suit your purposes.

This is not an inconvenience out of the box. Just click on a file that you want to load. MakuluLinux will run the installed application for that file type.

Hot Corners is a feature unheard of in Xfce integrations. On the Hot Corners settings panel, you can select any or all four screen corners to activate with the mouse pointer. You can assign a variety of actions: mute volume, prevent screensaver from starting, start screensaver, enter standby or suspend modes, or create a custom action.

Turn compositor on in Settings>Themes & 3D. An Easy on/off for Useful Tips feature gives you how-to bubble hints as you move around the screen.

Settings Manager panel gives you just the category controls instead of the entire system and settings menus. While in that menu, go to the Compiz Windows Setting Manager option to turn off/on all of the animation and 3D choices built into the desktop.

It is here that you can access settings to activate the plugins for Expo, Desktop Cube, Rotate Cube, Desktop Wall, Viewport Switcher and a whole lot more. Scroll further down the setting display for a list of effects you want to use.

These include 3D windows, Cube Gears, various animations, Wobbly windows, Snaping Windows and much more. Keep scrolling in this listing. You will find enough settings options to busy yourself for hours.

You can have a different background image and/or color scheme on each workspace and can set how often images change. This is awesome.

One area that reflects a change is the menu. Flash come with three different menus. Xfce elsewhere gives you two.

Instead of the Synapse menu, which Raymer feels has fallen out of popularity, there is a full screen menu similar to the GNOME 4 style. You can remove it, if you want, and maybe replace it with another type of application menu.

The third menu option is one that pops up anywhere on the desktop where you right-click. That action gives you a fully populated but streamlined menu.

This menu feature is one of my favorite features in the classic Xfce desktop, but Flash 2020 is anything but old and worn out.

I like the way Xfce works in MakuluLinux Flash 2020 a great deal. In fact, it is becoming a serious competitor to my current favorite desktops environments — Cinnamon and KDE Plasma.

This upgrade release has some annoying glitches, however. For instance, be careful when switching on some 3D features. All do not play well with some system hardware.

Some of the settings with all of the animations seem to knock each other out. I discovered one glitch after I set up different backgrounds for four virtual workspaces. Every time I rebooted the system, some unselected background turned up in all desktops.

The installation from the live session ISO was fast and easy. The installer even took care of petitioning options.

I squeezed Flash 2020 onto a hard drive already holding four other Linux distributions. I was able to replace one of them with a click without having to deal with a separate partitioning preparation tool.

Huawei announces the P40 and tries to stay relevant without Google